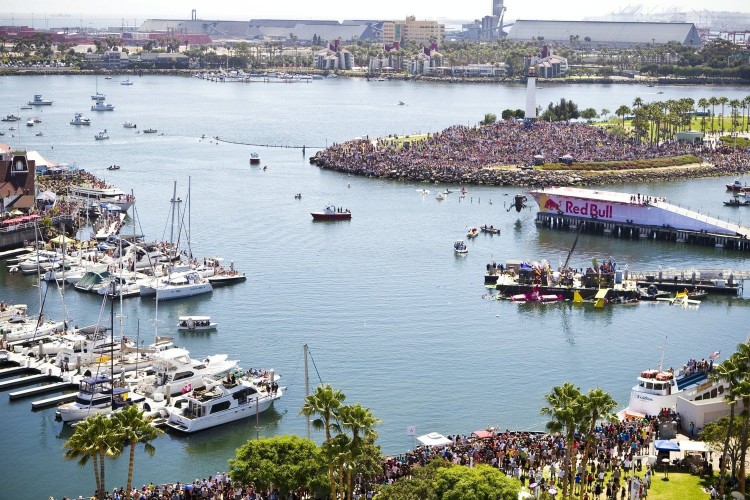 Co-owners of the popular Belmont Shore sports bar Eric Johnson and David Copley are heading up a Legendary Team that hopes to rekindle the dream of Howard Hughes and his Spruce Goose.

A miniature model of the famed aircraft is the team’s entry in the Red Bull Flugtag competition. Nearly 30 teams from as far away as Alaska will compete in Long Beach’s Sept. 21 event, launching their flying machines from Rainbow Harbor’s pier to see which will go the farthest.

This year’s Flugtag, German for Flying Day, is a national event, with five cities hosting competitions on the same day: Long Beach, Dallas/Ft. Worth, Washington, D.C., Miami and Chicago.

This is the second time it has been held in Long Beach.

In 2010, the event drew more than 100,000 people to Rainbow Harbor and the Pike, jamming the area south of Ocean Boulevard as 36 teams launched off a 28-foot-high ramp from the Pine Avenue Pier. In that event, the human-powered semiflying machines included a grand piano, a giant pig and a larger-than-life mock-up of President Obama’s head.

The 2010 event is considered the largest single-day event in terms of attendance in the city’s history.

Johnson and Copley, also co-owners of the Auld Dubliner on Pine Avenue south of Ocean Boulevard, said that good progress has been made on the construction of their version of the legendary Spruce Goose, which flew Nov. 2, 1947, in the Long Beach Harbor, without the benefit of Red Bull energizing drinks.

“We’re pretty far along,” Johnson said, adding that the fuselage is mostly done and work is beginning on the wings.

The team members are all friends, and all have collaborated on the project, Johnson said, adding that the majority of the work has been done by the other team members.

Until recently, they have worked mainly on weekends, including one water test in a friend’s pool. But with the competition less than two weeks away, they may have to put more hours into the project, the team members concluded during a Saturday work session.

They estimated — figuring by a quick impromptu calculation — that they have worked about 80 hours.

The miniature Spruce Goose, the team estimated, could end up weighing about 140 pounds: 80 pounds for the 20-foot-long fuselage, and about 60 pounds for the 26-foot-wide wings. The frame is made of a light aluminum and will be covered with sailcloth, according to Copley.

The craft will be powered by the team members, who will run-push it off the Pine Avenue Pier launch site.

On the Thursday before the Flugtag event, the Spruce Goose model will be showcased at the Legends bar, and on Friday it will be displayed at the Pine Avenue Circle.

Despite the progress, the team members do not share confidence that it will actually fly.

“We go back and forth on how far it will fly,” said Copley.