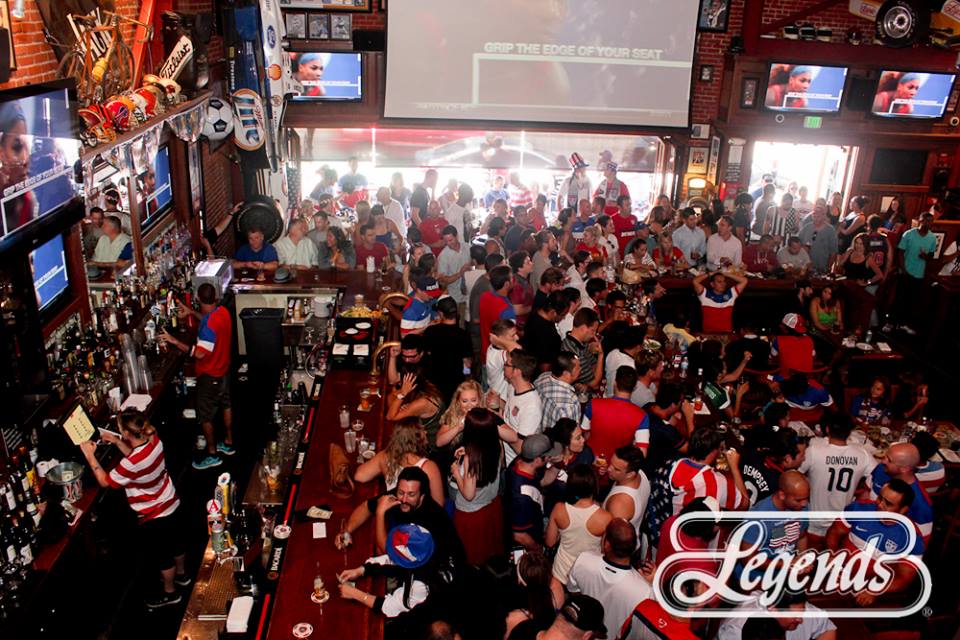 (original article found here)
Maybe it’s the giant projector screen that covers its western wall with the marquee game of the day. Maybe it’s the prime spot smack dab in the middle of Second Street in Belmont Shore, or its un-official crown as the “first modern sports bar in America.” There’s something special about watching a big game at Legends Sports Bar, and it being voted best place in the city to watch sports has just as much to do with its past as it does the present.

Co-owner Eric Johnson remembers walking into Legends for the first time when he was a child and getting to meet then Rams starting quarterback Vince Ferragamo and the team’s cheerleaders. When he helped purchase the sports bar he inherited a lot of memorabilia lining the walls that includes autographed balls from legendary athletes like Ty Cobb, Babe Ruth and Joe DiMaggio. When they took over, a “jaw dropping” gift to a his business partner—in the form of the Indy Car driven by Bobby Rahal during the Long Beach Grand Prix—was added to the interior decor.

“It’s much more than a bar or restaurant,” Johnson said. “It’s like a sports hall of fame kind of deal when you walk in. Certainly the big screen is what sets it at a whole different level. I hear it all the time when I’m at the front door.”

Johnson’s ownership has made it a point to be a part of the community because he said as one of the businesses that’s synonymous with Long Beach, it’s a responsibility they hold to give back. They’ve sponsored local sports teams from area high schools and even hosted watch parties for Cal State Long Beach men’s basketball teams when awaiting their fates in the annual NCAA tournament.

Whether its Monday Night Football, March Madness or FIFA’s World Cup, Legends is always one of the busiest bars inside and out, as people walking by can stop an view the action on the projector through its open patio lining the sidewalk. Johnson said that vibe is a big part of their success and has helped build a loyal patronage. The allure goes past the wings, burgers and beer, it’s the feelings imbedded in the memories while watching sports history unfold inside Legends.

“We’ve got great food, great service, I love our location in the heart of Belmont Shore,” Johnson said. “But I think there’s a bit of nostalgia being the first modern sports bar in America, there’s definitely a nostalgia that goes with that. There’s been so many great games viewed in that location that there’s kind of an ambiance that you don’t get in other locations.”